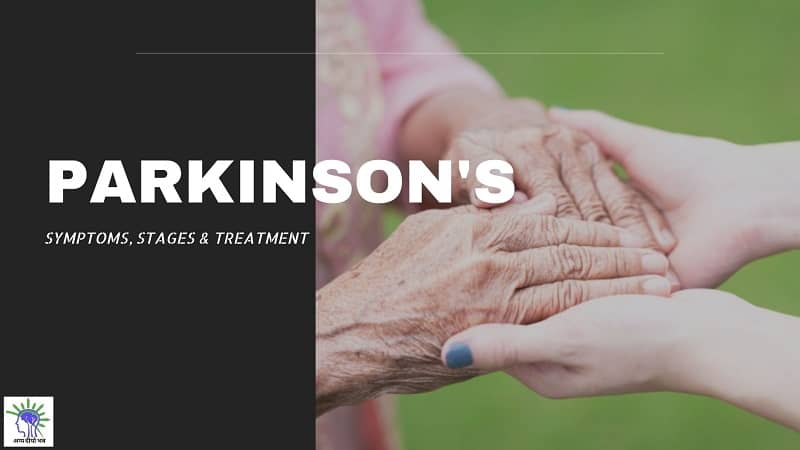 Parkinson’s or Parkinson’s disease is a progressive neurological degenerative disorder. It is related to decreased dopamine levels, the crucial brain chemical that controls coordinated movements. The symptoms of Parkinson’s gradually begin and gets worse as time passes. With the progress, patients may face shaking, stiffness, and difficulty with walking, talking, balance, and coordination.

Although both men and women are affected by Parkinson’s disease, it hits about 50 percent more men as compared to women. Older people are more prone to this disease and only 4 out of 100 cases happen under age 50. Patients also encounter mental and behavioral changes, sleep problems, depression, memory difficulties, and fatigue.

Therefore, it is important for people with Parkinson’s disease to be assessed by a professional neurologist like Dr. Vivek Pratap Singh in order to receive some specialized treatment. 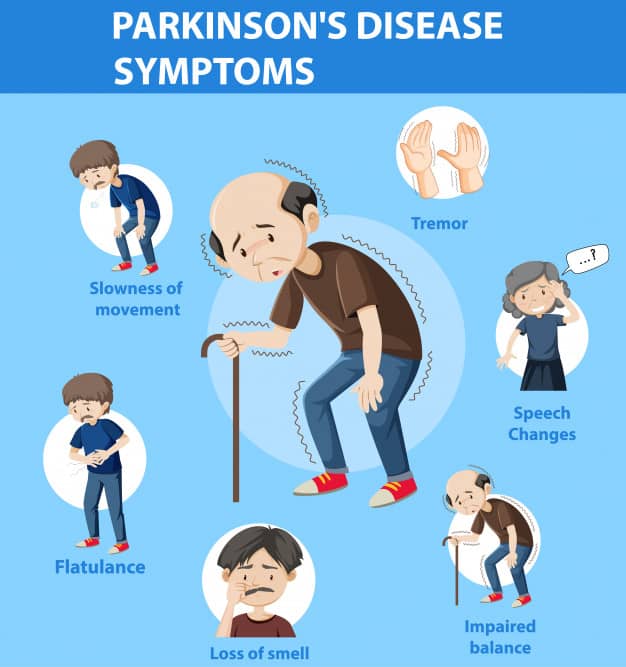 Tremor refers to shaking that begins in a limb usually your hand and fingers. It is a pill-rolling tremor when you rub your thumb and forefinger back and forth. Your finger, thumb, or chin may tremble when at rest.

It is one of the most common Parkinson’s symptoms. You may have a stooped posture over time or you may have an impaired balance problem.

Simple tasks may get difficult and time-consuming for you as overtime Parkinson’s may slow down your movement. Your steps may get shorter and you may drag your feet while walking. You may also find it hard to get out of a chair.

You may lose or lower your ability to perform unconscious movements that also include smiling, blinking, or swinging your arms while walking.

You may slur or hesitate while trying to talk. You may also speak quickly or very softly and you may have a monotone speech rather than having the usual inflections.

The muscles in any part of your body may become rigid or stiff. This muscle stiffness can limit your range of motion and be very painful and unendurable.

You may either have small handwriting or it may become hard for you to write.

Doctors who diagnose Parkinson’s rely on the Hoehn and Yahr rating scale that is divided into five stages based on disease progression. This helps in evaluating how far the disease has advanced. The 5 Parkinson’s stages are:

It is characterized by mild symptoms that are not severe enough to interfere with your daily lifestyle. These minimal symptoms are often missed. Tremors and other such difficulties remain on one side of the body.

Tremors, rigidness, trembling and changes in facial expressions are much more noticeable than those experienced in stage 1. Symptoms can be seen on both sides of the body and difficulties in walking and impaired posture may develop.

It marks the middle of Parkinson’s stages with slower movements, reduced reflexes, and loss of balance. Falls become more common and daily tasks are significantly affected.

Assistive devices become a must for regulating movements. People are unable to stay on their own and daily tasks get near to impossible.

It is the most advanced stage where freezing upon standing or walking occurs. People need wheelchairs and around-the-clock assistance to prevent falls. Sometimes they encounter hallucinations, confusion, delusions, and dementia.

There are no specified tests for Parkinson’s disease diagnosis. A neurologist, who is trained in nervous system conditions, will diagnose Parkinson’s on the basis of your medical history, a physical and neurological examination, and a review of Parkinson’s symptoms and signs.

A specific SPECT (Single Photon Emission Computerized Tomography) scan, called a Dopamine Transporter scan (DaTscan) may be suggested by your doctor to support the suspicion of Parkinson’s. However, your symptoms and neurological examination provide the ultimate diagnosis. Most patients do even need DaTscan.

To rule out other conditions for the symptoms, your doctor may order lab tests like blood tests, imaging tests like MRI, PET scans, and ultrasound of the brain. Additionally, your doctor may give you sufficient doses of carbidopa-levodopa (Rytary Sinemet, others), a Parkinson’s medication as a significant improvement with this will confirm your Parkinson’s disease diagnosis.

Sometimes, it requires time and regular follow-up appointments with neurologists to diagnose Parkison’s disease. That is why, it is crucial for you to contact well-trained neurologists like Dr. Vivek Pratap Singh, who is well versed in movement disorders to evaluate your symptoms.

How to Prevent Parkinson’s Disease?

Unfortunately, there is no known cure and it is not fully acknowledged what causes the dip in Parkinson’s disease dopamine. Nonetheless, with exercise and proper diet, you can try to prevent the disease before the symptoms arise.

A regular balanced diet will give you the strength to fight Parkinson’s symptoms. You should incorporate organic, fresh, and raw vegetables, vitamins like B, D3, and omega-3 fatty acids into your diet. Other than that CoQ10 and green tea are also essential. The importance of exercise cannot be overstated. Regular aerobic exercise provides overall longevity and reduces inflammation in the brain.

How to Test Yourself for Parkinson’s?

You can begin to test yourself for Parkinson’s by trying to identify the symptoms at home even though you need a doctor for an accurate diagnosis.

Look out for tremors in your hands or fingers. Check if your movements are slowed or distorted. You can also lookout for a shuffling gait with short steps and a tendency to lean forward. Do examine your posture, cognitive impairment, and speech disturbances if any. Signs of depression, gastrointestinal issues, and difficulty in sleeping should be taken into consideration as well.

As mentioned above, this disease can’t be cured but certain medications can keep the symptoms in control. The prescribed medications may comprise Carbidopa-levodopa, dopamine agonists, MAO B inhibitors, Catechol O-methyltransferase inhibitors, Anticholinergics, and Amantadine.

Besides, Parkinson’s treatment via surgical procedures includes Deep brain Stimulation (DBS). Needless to say, healthy eating and exercise are of paramount importance as they make living with this disease much easier. In addition, supportive therapies like massage, tai chi, yoga, etc can also ease your lifestyle.

Established in 2016, Parkinson’s foundation was set up through the union of the National Parkinson Foundation and Parkinson’s disease Foundation. It is a national organization with the mission to make life better for people with Parkinson’s disease through improved care and advanced research towards a cure. Its headquarters are located in Miami and New York City.

In case you’re looking for the finest Parkinson’s treatment center in Patna, then Dr. Vivek Pratap’s Neuro and Child Psychiatry Clinic should be your foremost choice. Dr. Vivek Pratap Singh is referred to as the best neurologist in Patna. He had the privilege of working as a Neuropsychiatrist at the prestigious AIIMS and PMCH Patna.

Dr. Vivek Pratap Singh, the best neuro physician in Patna, is a committed high-profile doctor who is reputed for his high level of patient satisfaction score. Patients come to his brain and nerve clinic Patna, Bihar for the best possible Parkinson’s treatment.