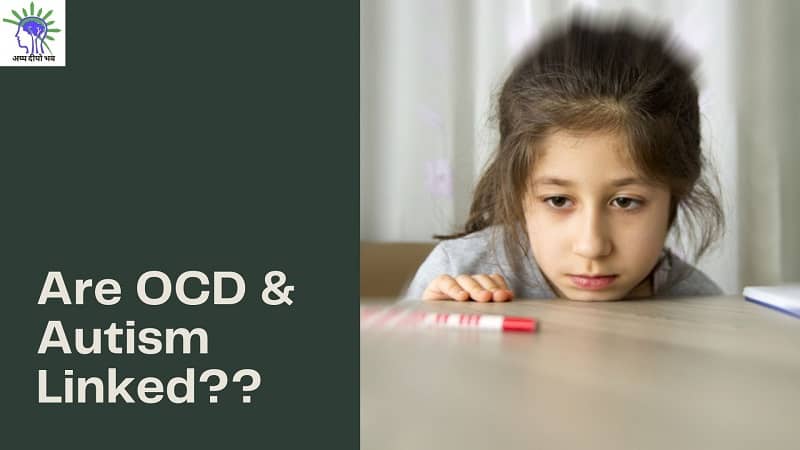 Does having OCD make me prone to autism? If this question haunts you 24×7, it’s not just your compulsive thought. It’s a genuine thought that arises even in the mind of non-OCD people that are OCD and autism linked. Moreover, if you get such thoughts, then stay calm and go through this blog to seek all your answers.

So, are OCD and autism linked?

Both OCD and autism join hands when it’s about repetitive and compulsive behaviors. However, it is still not concrete if they overlap.

Nevertheless, the symptoms share similarities. Thus, let’s first look at the symptoms to answer are OCD and Autism linked?

OCD And Autism: Symptoms In Common

So this was all about the symptoms. Moving further…

Their treatments are like poles apart even though both are brain abnormalities.

For instance, medications for OCD like SSRIs was ineffective in treating patients with autism

Thus, putting all pieces together we can say that OCD and Autism are not linked, despite having a couple of things in common.

Furthermore, to testify to our conclusion, let’s see a more logical explanation below.

Logical Explanation On The Relation Of OCD And Autism

The level of mindful behavior differs both in OCD and autism. To help you understand better about this, let’s see it this way….

A person struggling with autism is involved in repetitive behaviors unconsciously. They have zero ideas of what they’re doing

On the contrary, people with OCD exhibit the same behaviors but are conscious about them too.

Their behavior turns into obsessions that draw curtains on their real thoughts. Thus, disabling them to come out of the delusional loops.

Additionally, they carry these repetitive rituals to overcome their fear, that if left incomplete can lead to something bad.

We now have an answer to the question; are OCD and autism linked. Thus, let’s now discuss some of the effective strategies to cope with OCD and autism.

Despite having so many similarities between OCD and autism, their treatment varies.

6 Easy To Implement Strategies To Cope With OCD are:

Hence, distraction is key here. As soon as you feel you’re falling into that loop trap, change your mind focus.

6 Easy To Implement Strategies To Cope With Autism are:

So, moving forward, let’s discuss; is OCD on the autism spectrum?

Is OCD On The Autism Spectrum?

Autism with spectrum means a situation in which people show only a few symptoms, unlike others. In other words, it means entering into the initial stage of autism.

Now you might say that the symptoms of both the disorders involve ‘obsessive behaviour’, thereby making them similar.

However, the answer is ‘No’. OCD is not on the autism spectrum though they appear identical.

So, despite sharing so many symptoms in common, the conclusion is, they are not synonyms of the same disorder.

We now have a clearer idea of; are OCD and autism linked. Thus, moving forward, let’s look at the autism obsession list, which a patient inculcates to.

Below-enlisted is some of the common autism obsessions symptoms.

Now that we know about what an autism obsession with a person looks like, let’s talk about the best doctor who can treat the same.

An issue becomes a disorder if it is repetitive, intense, and chronic, along with underlying medical complications.

Subsequently, it requires examinations and suitable treatment. Ultimately, it means you need an expert for the same.

Presently he is also practising in his very own organisation; Pratap’s Neuro and Child Psychiatry Centre.

However, the perks don’t end here. Additionally, his treatments are cheap yet effective. Therefore, 100% value for money.

Further, he has answers to all your questions like do people with OCD stim? Or is OCD on the spectrum, and so on…

Not just this but he carries every OCD or autism test with utmost care and precision, thereby, giving you true results.

Putting all the pieces together, we walked you through all know-hows of the question; are OCD and autism linked.

Further, we dealt with different strategies to cope with them individually. Moreover, we recommended the best psychiatrist in Patna, for treating pure OCD and autism.

Thus, whether or not OCD is linked with autism can take a back seat when you wanna undergo an effective treatment for either of them.