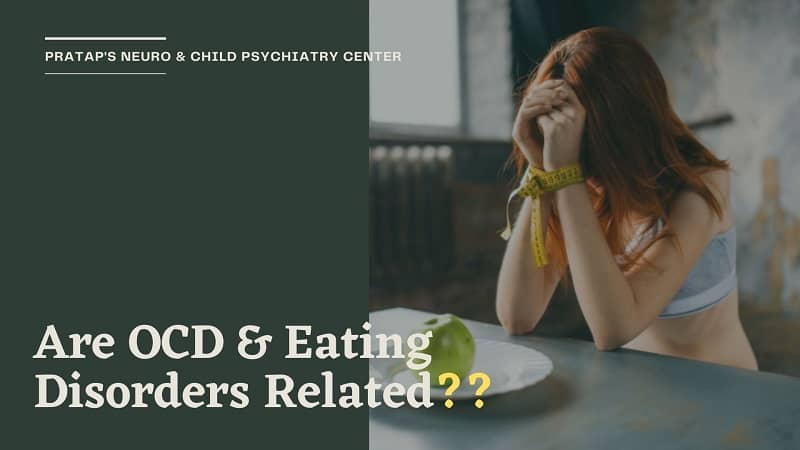 Do you also put up with the same question are OCD and eating disorders related?

Then in this blog, you’ll get all the answers in a comprehensive manner.

So, keep going through the blog to figure out all the terms related to OCD.

First thing first in order to comprehend the answer to your question are OCD and eating disorders related, you need to understand what is OCD?

Obsessive-compulsive disorder (OCD) is an anxiety disorder which leads to certain repetitive thoughts, sensation or behavior.

Moreover, it is depicted by the feeling of uneasiness or disquiet leading the way to extensive anxiety.

Nevertheless, people with OCD struggle with recurrent obsession and compulsions.

However, with time the obsession goes severe so, if you are also wrestling with the same affliction and residing in Patna or somewhere near it visit Dr. Vivek Pratap Singh who provides the best OCD treatment in Patna.

We’ll give you précised information about him later, first, let’s address does OCD cause eating disorders?

Well, now that you know OCD tends to repetitive behavior you must be wondering maybe it causes eating disorders too.

So, read below to clear your mind about Are OCD and Eating Disorders Related?

Does OCD Cause Eating Disorders?

As OCD leads to repetitive behaviors, it may cause obsessive thoughts about foods.

People with this disorder need instant treatment as it may affect their body leading to obesity.

Hence, there are not only eating disorders that are allied with OCD, many more disorders are also linked with this disorder.

Now, let’s get on with some of the other disorders associated with OCD…

What Disorders Are Related To OCD?

There is a wide span of disorders that shares some symptoms with OCD and are also treated in the same manner.

Some of the disorders are….

People with this disorder agonize from headache, stomach pain, and fatigue which are expounded as a serious illness.

A person with this disorder feels the impulsion of pulling hair from the scalp or other parts of the body comprising the lashes, eyebrows, etc.

It is one of the skin picking disorders which leads to picking of the skin constantly to cause damage.

People with this disorder do this unintentionally and feel good while picking the skin.

This disorder is characterized by the person’s repetitive behavior of hoarding things in excessive amounts whether they have a use of it or not.

Some more disorders include….

These were some associated disorders of OCD along with eating disorders…

Now, moving ahead it’s a myth that people with OCD are only into binge eating while some also avoid food to a large extent and create negative thoughts about the food itself.

Read ahead to behold about food aversion OCD…

What is Food Aversion OCD?

Food aversion is generally characterized as a strong dislike of certain foods.

Moreover, OCD people feel these kinds of food aversions like the food they prefer to eat the most will not even look at it.

As they create certain sensitivity to smell and taste and now which affects the tendency of eating their favorite food.

Moving ahead we all have concerns about our health but what if it becomes an obsession.

Hence, there is also another term hypochondria disorder which leads to this obsession and might have some similarities to OCD.

Are OCD and Hypochondria Related?

Alike people with OCD have some repetitive behavior and compulsions, Hypochondria’s patients also suffer from excessive concern about their health.

Moreover, they are obsessed with doing things like consulting doctors, checking blood pressure to reduce the anxiety about their health.

Now, you know how severe this disorder is so, don’t kill time and consult some of the best psychiatrists near you.

However, if you are a resident of Patna consult Dr. Vivek Pratap Singh, who is one of the chief neuropsychiatrists in Patna.

Let’s perceive some more information about him…

Dr. Vivek Pratap is the best Neuropsychiatrist in Patna and also has 9 years of experience in this field.

He has finished his MBBS from BP Koirala institute of health science in 2012 and MD. From DY Patil Clinical school in 2018.

With such excellence in the medical field, he has treated many patients with ease and currently practicing at his own organization Pratap neuro and child psychiatry center.

Hope you get all the answers to your question are OCD and eating disorders related?

However, if you still have any doubt related to OCD and any other terms related to it… kindly ask us in the comment section below…