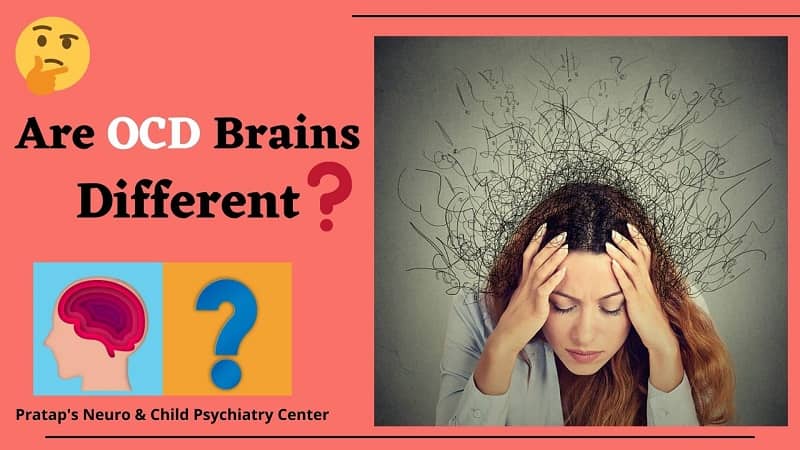 Obsessive-compulsive disorder (OCD) is a mental health condition that affects people of all ages and walks of life. It develops when an individual becomes trapped in a cycle of obsessions and compulsions. Obsessions are unwelcome, distracting thoughts, images, or impulses that cause a great deal of distress.

However, during emergencies or worst-case scenarios, if you want to consult a specialist, consult the best Psychiatrist in Patna, Dr. Vivek Pratap Singh.

Now the question arises “Are OCD Brains Different?” In this article, we will answer that very question. We will cover various topics including arguments like how does OCD affect the brain and OCD brain damage.

Does OCD Damage the Brain?

People with OCD usually realize they are doing something they should not be doing, but they cannot seem to stop themselves. That is because people with obsessive-compulsive disorder have brains that are excessively sensitive to communication mistakes and have less functionality in places that manage impulses.

Following the topic “Are OCD Brains Different?” here are some of the ways in which OCD can damage the brain:

Reduced Gray Matter in parts of the brain

Serotonin is a neurotransmitter that keeps a person calm, helps one sleep well, and makes a person feel at ease. However, if one serotonin levels are affected by obsessive-compulsive disorder, he/she can feel constantly on edge and unable to relax.

Communication problems in the brain

Scientists also discovered that OCD disrupts contact between the frontal cortex and the ventral striatum, a region of the brain. OCD deceives the brain into believing that compulsions and habits, rather than a logical approach, can fix troublesome obsessive thoughts.

What Part of the Brain Does OCD Affect?

To answer the question “Are OCD Brains Different?” one needs to understand how OCD affects the brain and also affects which part of the brain.  Here are some parts of the brains that the OCD affects:

Motivation and behavioral responses are handled by this portion of the brain. Positive and negative responses are triggered by actions, which are connected in the brain by the cingulate gyrus. The activity in this part of the brain is also more frequent in people with OCD.

The orbital cortex is a prefrontal lobe area of the brain that is responsible for a number of decision-making cognitive processes. The orbital cortex’s feature that is important to OCD is mistake detection. People with OCD have stronger responses in the orbital cortex, making them feel as if something is wrong even though they are going about their daily lives.

Procedural learning, associative learning, and inhibitory regulation of behavior are all handled by this portion of the brain. The caudate nucleus of people with OCD is often less involved. So, while their orbital cortex and cingulate gyrus work overtime to cause fear in response to a perceived error, the caudate nucleus is powerless to help them overcome their urges to correct the mistake repeatedly.

What Causes OCD in Brain?

Some other symptoms of OCD include Brain Inflammation.

Inflammation is a natural process that occurs as part of the immune response and as a response to injury. However, if the degree of inflammation is excessive or lasts for an extended period of time, it can have negative effects.

According to the findings of a recent brain imaging report, people with obsessive-compulsive disorder (OCD) have 32 percent higher brain inflammation on average than people without the disorder.

Nevertheless, if you are facing such issues and want to get a real good OCD treatment in Patna, then visit Dr. Vivek Pratap Singh.

Dr. Vivek Pratap Singh, a well-known neurology specialist in Patna, is a well-known doctor. He has over four years of medical experience in a variety of hospitals and clinics. He is a professional and also involves in a variety of ways in addition to his association with several hospitals.

Dr. Vivek Pratap Singh graduated from BP Koirala Institute of Health Sciences with a bachelor’s degree in medicine. After that, he pursued his M.D. (Psychology) degree.

However, if you still have questions like are OCD brains different or any such queries, do write in the comment box.