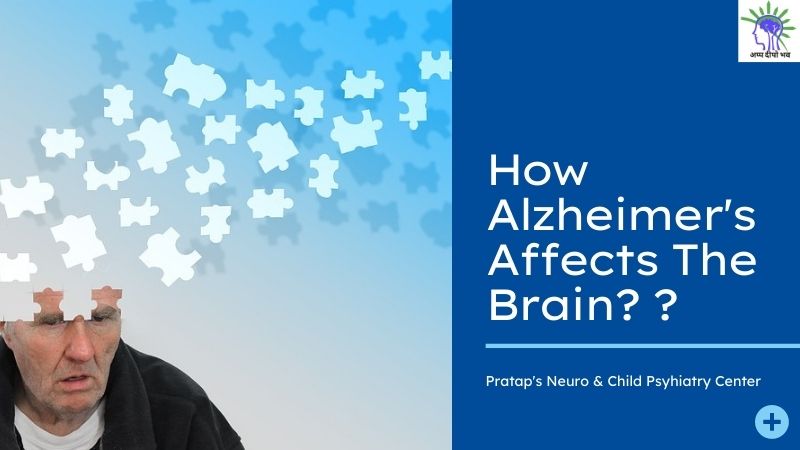 How Alzheimer’s Affects The Brain? Well, a healthy human brain contains tens of billions of neurons, specialized cells that process and transmit information through electrical and chemical signals.

They send information between different parts of the brain and between the muscles and organs from the brain to the body.

Alzheimer’s disease disrupts this communication between neurons, leading to loss of function and cell death.

The exact cause of Alzheimer’s disease is not fully understood. But at a basic level, brain proteins cannot function normally, disrupting the work of brain cells (neurons) and triggering a series of toxic events.

Moreover, neurons are damaged, lose contact with each other, and eventually die.

Note: If you know someone or your loved one is suffering from this disease, do let them consult with Dr. Vivek Pratap Singh…the top Neuropsychiatrist in Patna.

Moving on with his…a kind of plaque also lead to Alzheimer & that is beta-amyloid plaques…let’s see what causes that.

When these fragments gather together, they appear to have a toxic effect on neurons and disrupt communication between cells.

Alzheimer’s disease was first described in 1906. In the century since then, scientists have made remarkable progress in understanding how Alzheimer’s disease affects the brain and learning how to improve the lives of affected individuals and families.

Now, let’s get to the most important question, how Alzheimer actually affect the brain & what lobes of the brain are affected by Alzheimer’s.

How Alzheimer’s Affects The Brain?

So, the early signs of Alzheimer’s lead the person to forget recent activities, events, & conversations.

The Symptoms of Alzheimer’s Include:

Though, there are three common types of this Disease, regarding the similarity in the effects.

This type of Alzheimer occurs in people under 65 years of age. When the disease is diagnosed, they are usually in their 40s and 50s.

This occurs after the age of 65, moreover there is no evidence that this runs in families that means no genetics is linked behind the occurrence of this onset.

The doctor determined that Alzheimer’s disease is genetically related. At least two generations of affected families have suffered from this disease.

Dr. Vivek Pratap Singh, being the most versatile Psychiatrist in Patna has been serving his patients for more than 10 years.

Moreover, he pursued his MBBS from BP Koirala Institute of Medical Science & MD (Psychiatry) from Dehradun.

He provides the best treatment for Alzheimer & his treatments are also not costly.

So, if you know someone who is suffering from the disorder…just give us a call for a consultation.

Alzheimer disease is a kind of disorder that can’t be cured…but you can take preventive measures..Look out for the best psychiatrist near you.

However, we gave an overview of how Alzheimer’s affects the brain.

Nonetheless, if you still feel any doubts or queries…Feel free to call us or write them in the comment section below.