What are some of the weirdest compulsions that people with OCD have? 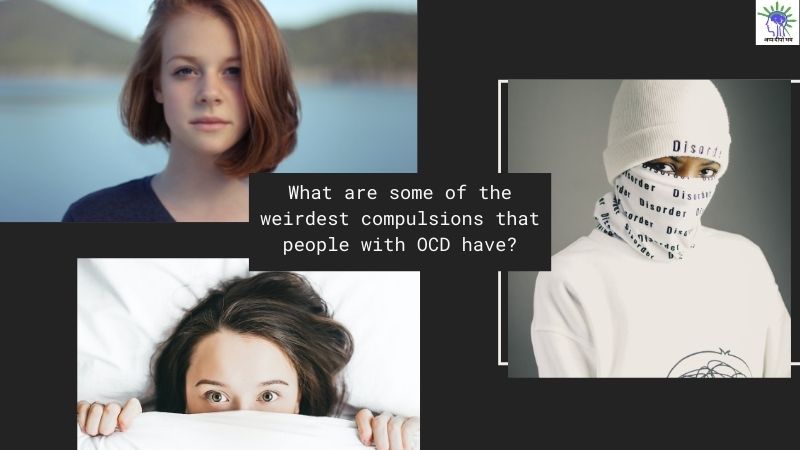 12 Jul What are some of the weirdest compulsions that people with OCD have?

Go through this Blog, if you are confused about OCD & want to know what are some of the weirdest compulsions that people with OCD have?

So, talking about OCD, what really comes to your mind, well, it must be aligning things in the same pattern or cleaning things regularly even if they are clean.

Hence, these are the most common types of OCD, but there is some worst kind of OCD, through which people are suffering very roughly, want to get rid of it, and can’t even explain it to anyone.

Do you know why? The reason is people are not aware of those rare forms of OCD, that can be precarious and life-taking.

Now, let’s come to the point, here through this blog, you’ll get to understand the weirdest compulsions of OCD, Hence, you should also share it with those who don’t know what the people with OCD are suffering through.

Some of the weirdest compulsions that people with OCD have

Obsessive-Compulsive Disorder, word itself shows that it is a brain disorder that strikes through obsessions, compulsion, & several anxiety thoughts.

Moreover, according to Dr. Vivek Pratap Singh, practicing as the OCD doctor in Patna, when the person feel a compulsion, the action they do are only to reduce their anxiety or stress.

Most people with OCD know they are wrong at some point but, can’t resist doing things perpetually.

4 weirdest compulsions of obsessive-compulsive disorder are……

For some people with OCD, it can be very annoying if something is left on odd numbers like the volume of the TV, Temperature of AC, or even the time on the clock, while with others with OCD it can be vices versa.

It may sound funny! But, can be the worst kind of OCD, challenging the person mentally.

While walking through footpaths or roads, people have this unusual tendency of not stepping in lines between the blocks. They intentionally avoid stepping on lines and would even make a small jump if about to step on a line.

Imagine, waking up early in the morning & planning for the whole day, isn’t a big deal right! But, what if someone is planning like at 9 “O” clock I’ll take bath, at 9.15 I’ll eat, and at 9.30, I’ll leave the house, this sounds baffling, but people with OCD do this in real life.

What causes OCD to get worse? The compulsive thoughts & actions, washing hands & checking things can be acceptable, but what if the person going through the road is counting every brick or tress & might get distracted getting to an accident

So, these can be some of the weirdest compulsions, yet transforming a stable person into mentally ill, thus, if you don’t want to come across with anxiety & mental illness due to this OCD symptoms checklists, try consulting Dr. Vivek Pratap Singh, who is the prominent Neuropsychiatrist in Patna, treating people over a decade.

What Are the 4 Types of OCD?

It’s not easy to find the definitive types of OCD, as sometimes it takes years to diagnose through what kind of OCD, a person is really suffering.

However, OCD intrusive thoughts can give rise to some of the most common OCD symptoms.

If you are looking to get treatment but don’t know a good psychiatrist in Patna, then you should once Visit Dr. Vivek Pratap Singh who provides the best OCD Treatment in Patna.

Furthermore, you are really going to like his treatments & will see rapid growth in brain fighting OCD.

Let, us give some information about him, as he has been practicing for more than 10 years, and have the ability to read the minds of his patients.

Withal, he is a very dedicated psychiatrist giving the best possible treatments to his patients, & has treated many with positive recoveries.

So, if you are a person, who needs help regarding your weirdest OCD symptoms, then do Visit Dr. Vivek Pratap Singh who has his own clinic Pratap’s Neuro & Child Psychiatry Center, Kankarbagh.

Being through this kind of symptoms can make you feel alone, however, you can also join some Support groups for OCD, and maybe join some online forums.

Now, we take your leave, hope this article regarding What are some of the weirdest compulsions that people with OCD have was helpful for you.

Nonetheless, if you have any further queries, ask us without any worries in the comment section below.

Contamination OCD, Obsessive-Compulsive Disorder, OCD Intrusive Thoughts, OCD Symptoms Checklist, Rare Forms of OCD, What Are Some Of The Weirdest Compulsions That People With OCD Have, What Are the 4 Types of OCD, What Causes OCD to Get Worse, Worst Kind of OCD